(Abingdon, VA) – Nestled in the foothills of Southwest Virginia, Abingdon is a picturesque community situated a short drive from the Tennessee state line. Once nicknamed Wolf Hills by the famed frontiersman, Daniel Boone, the community has since weaved this moniker into its local traditions. One such example includes the Abingdon Wolf Project, which encourages local businesses to decorate sculptures of wolves and proudly display them around town. The initiative is just one of many examples of the influence this local lore plays within the community.

In early 2019, the Abingdon Police Department launched an internal evaluation of its
current graphics package to identify potential options for a full redesign. At the time, the agency operated the generic Ford interceptor decals that have been widely advertised on demo units since 2012. What originally began as a conversation to incorporate the local High Schools mascot, a falcon, soon evolved into a project to showcase the towns unofficial symbol into a unique design that would be embraced by the community.

Under the leadership of Chief Sullivan, the Abingdon Police Department contacted local vendor Jerry’s Signs and Awnings to utilize officer feedback to mock-up a graphics package that truly embodied the spirit of the agency. At the time, the department had already re-designed its badges with a howling wolf which led to a seamless integration of design elements. Taking the graphics one step further, the agency capitalized on local geography by incorporating an image of the Blue Ridge Mountains as seen from the Grayson Highlands State Park as its backdrop. Together, the two elements create a beautifully crafted graphics package that is uniquely Abingdon.

With a newly restriped cruiser ready to showcase the agency’s elaborate design, the Abingdon Police Department coordinated a Facebook Live unveiling to celebrate it’s 10,000th fan. As you would imagine, the feedback was overwhelmingly positive and the agency hopes to have the old design fully phased out and replaced by the end of March. 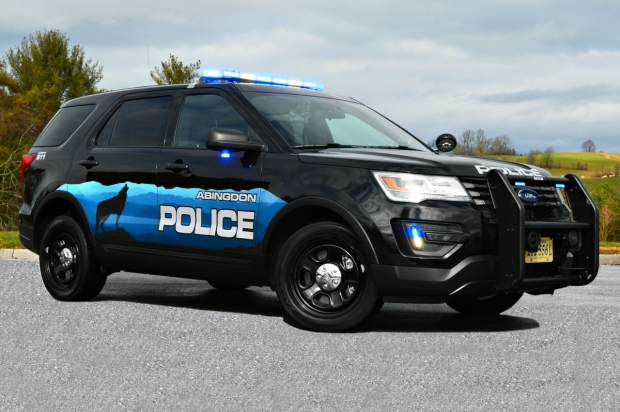