(Hyattsville, MD) – The Ford Crown Victoria was the go-to cruiser of choice for the majority of law enforcement agencies across the United States. Since being phased out in 2011, auto manufacturers have fiercely competed against each other to develop a line-up of vehicles that provide a balance between versatility, comfort and performance. The evolution of the modern era Police Pursuit Vehicle (PPV) has led many agencies to upgrade to SUVs or the newly released pursuit rated Pickup Truck options for increased versatility. Meanwhile, others prefer the lower stance and performance benefits provided by one of the many Sedans available that are often on the lower price range of a states vehicle procurement rate. However, as advancements in technology continue to improve, some agencies are beginning to give alternative fuel vehicles a hard look.

The Hyattsville Police Department undertook a major project to acquire an electric vehicle and convert it into a fully functioning patrol vehicle. The initiative was spearheaded by Sgt. Richard Hartnett, an avid electric vehicle enthusiast, who identified an opportunity for the agency to acquire the vehicle through a special grant from the Maryland Energy Administration. Under the grant requirements, the department was allowed to trade in a deadlined cruiser in exchange for equivalent funding that would be applied towards the purchase of a brand new Chevrolet Bolt. In addition, the agency worked with the Electric Vehicle Institute of Baltimore to place Electric Vehicle Charging stations throughout the Town of Hyattsville as part of the Maryland Alternative Fuel Infrastructure grant project. The grant funded 12 EV Charging Stations, of which six (Level 2 chargers) are restricted to government vehicles, and four Level 2 and two Level 3 (DC Fast Charge) stations are all available to the public with no cost for usage. 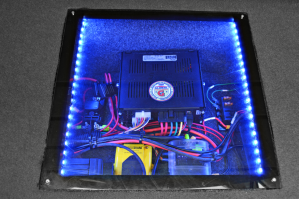 The Hyattsville Police Department selected the Chevrolet Bolt over other electric vehicle models because of its ability to travel over 238 miles on a full charge, which provided the agency with the range it desired to patrol its urban jurisdiction. Understanding the unique nature of its newest cruiser, the department worked closely with local upfitter Global Public Safety to design a package that transformed the Chevrolet Bolt into a fully functioning patrol vehicle. The vehicle itself was upfit using an array of Whelen lighting products to include a dual colored Legacy lightbar and Ions to provide a full 360-degree emergency warning package. Special consideration was given to the power drain of the vehicles battery leading to the addition of an automatic power cutoff that disconnects all aftermarket equipment 60 minutes after the vehicle’s ignition has been turned off. 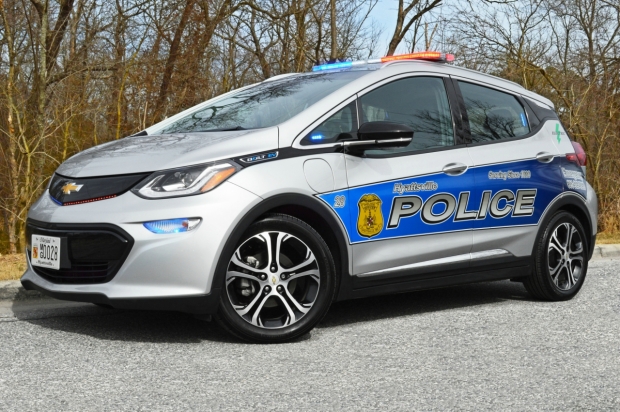 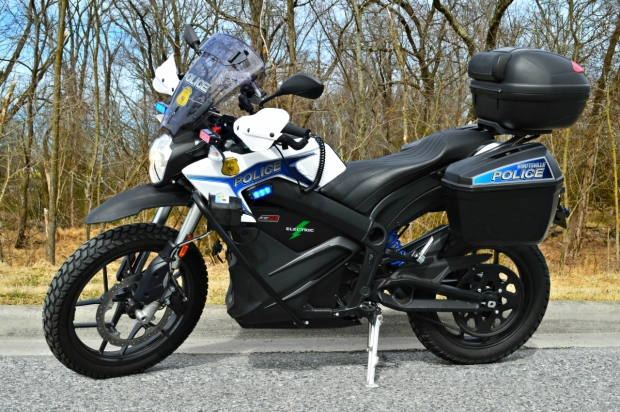 Since being introduced in 2017, the Chevrolet Bolt has been successfully patrolling the streets of Hyattsville. In comparison to the agency’s standard issued gas powered patrol vehicles, the Chevrolet Bolt has provided significant savings by reducing costs associated with routine maintenance because the vehicle does not require oil changes every 3,000 miles or the replacement of belts, filters and spark plugs. In addition, the vehicle automatically shuts off to avoid idling and produces no carbon dioxide. Due to the Bolts overall success as a patrol vehicle, the agency has since expanded its electric vehicle fleet with the addition of 2 Zero DSP All-Electric Fully Marked Police Motorcycles, 4 Segway Personal Mobility Devices, a 2017 Ford Fusion Hybrid, and an All-Electric Golf Cart used for special events. The Hyattsville Police Department is also exploring the option of adding additional Chevrolet Bolts into the mainline fleet through future fleet acquisitions. Though Hyattsville P.D. isn’t the first agency to purchase an alternative fuel vehicle, it certainly is one of the few to actually regularly use it for law enforcement specific duties. As automakers begin to develop pursuit rated hybrid patrol, we’re sure many will begin to slowly make the switch and find their way in fleets across the country. Until then, we tip our hats to the Hyattsville Police Department for thinking out of the box.