(Gainesville, FL) – The University of Florida Police Department encompasses 92 sworn officers who have the honor of serving one of the Sunshine State’s oldest and largest institutions of higher learning. Recently, the agency undertook a major initiative to introduce a new graphics package that pays homage to the school’s rich history and tradition. Under the leadership of Chief Linda Stump-Kurnick, the U of F Police Department commissioned Ocala based BB Graphics to create 4 concepts that embraced the schools iconic gator mascot as its predominate design element.

As noted by U of F Police Department’s Major Brad Barber, “As an agency, the University of Florida Police Department has the goal of fostering positive relationships and engagement with our community each day. The input and participation of our community members in helping design and select our final vehicle graphics is just one more example of how we achieve that goal.”  During a 2-week period, the department encouraged public feedback by accepting votes for the concept that would ultimately be emblazoned on its fleet of cruisers. The outcome is a stunning design that is unlike anything currently in-service within the collegiate law enforcement community. Upon first glance, your eye is instantly drawn to the beautifully detailed silhouette of a gator’s head and the intricate artwork that make the scales come to life. Like most agencies, the U of F Police Department operates a fleet of white cruisers which allow the schools iconic blue and orange color scheme to pop vividly against their backdrop. Lastly, a unique stripe was applied that presents a sense of motion as the vehicles stand still as though to symbolize a ripple in the water from the gator.

Beyond serving the collegiate community on the University of Florida campus, the agency also has the unique responsibility of providing law enforcement services to the P.K. Yonge Developmental Research School. The K-12 school sits on the eastern edge of the university campus and has a full-time School Resource Officer (SRO) assigned to it. This led the Police Department to create a special opportunity for the students of the school to help the agency in its rebranding efforts by designing its assigned SRO cruiser to reflect the special relationship between the school and the University of Florida. After several submissions, the winning design by student Shelbie Cooper was selected which incorporated the addition of the schools “Blue Wave” logo with the newly applied stripe. 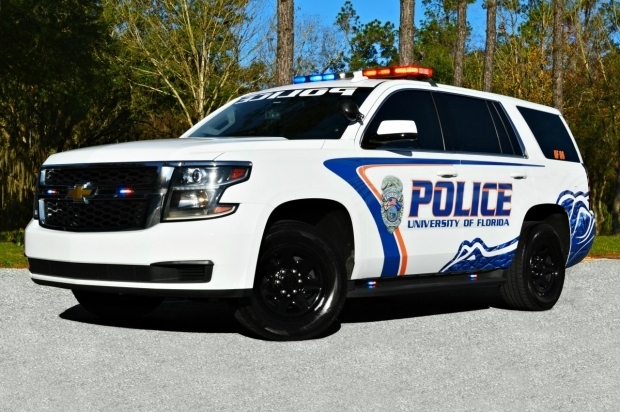 As a general rule, collegiate athletic logos are rarely adopted by law enforcement because most believe the approval process to be too complex. In many cases, that certainly could be true. However, we can affirm that not only was this design beautifully executed, it was adopted thanks in large part to the great partnership between the U of F Police Department and the school’s athletic department. Through this partnership, the design and associated logo was moved forward quickly without any further approval process required. With the new design presently being rolled out, the agency hopes to have its entire fleet of vehicles completed with the new look by April 2020.